A Staten Island bar located in a COVID-19 hotspot is stealing a page from Seattle’s anarchist cookbook, declaring itself an “autonomous zone” free from the public safety restrictions its owners say they will refuse to abide by.

“!ATTENTION! We hereby declare this establishment an !!!AUTONOMOUS ZONE!!!” reads signs outside and around Mac’s Public House in Grant City, invoking a phrase more commonly associated with the month-long occupation of Capitol Hill in the Emerald City by anti-cop radicals. “We refuse to abide by any rules and regulations put forth by the Mayor of NYC and Governor of NY State.”

The state had been warning for weeks that the South Shore was on the path to “orange zone” status, based on the area’s consistent and surging coronavirus positivity rate, and on Monday, Gov. Cuomo made the call. Restrictions, including the prohibition of indoor dining in bars and restaurants took effect Wednesday.

But Mac’s balked, and defiantly kept its doors open — despite being slapped with thousands of dollars in fines, a shut down order from the state Health Department and the Friday revocation of its liquor license by the State Liquor Authority, the owners said.

“At this point, we’re OK with it, because we’re not paying it,” co-owner Danny Presti said. “[The Sheriff’s Department] is issuing us $1,000 fines, so they keep coming back. We’re still here. We’re not letting them in.” 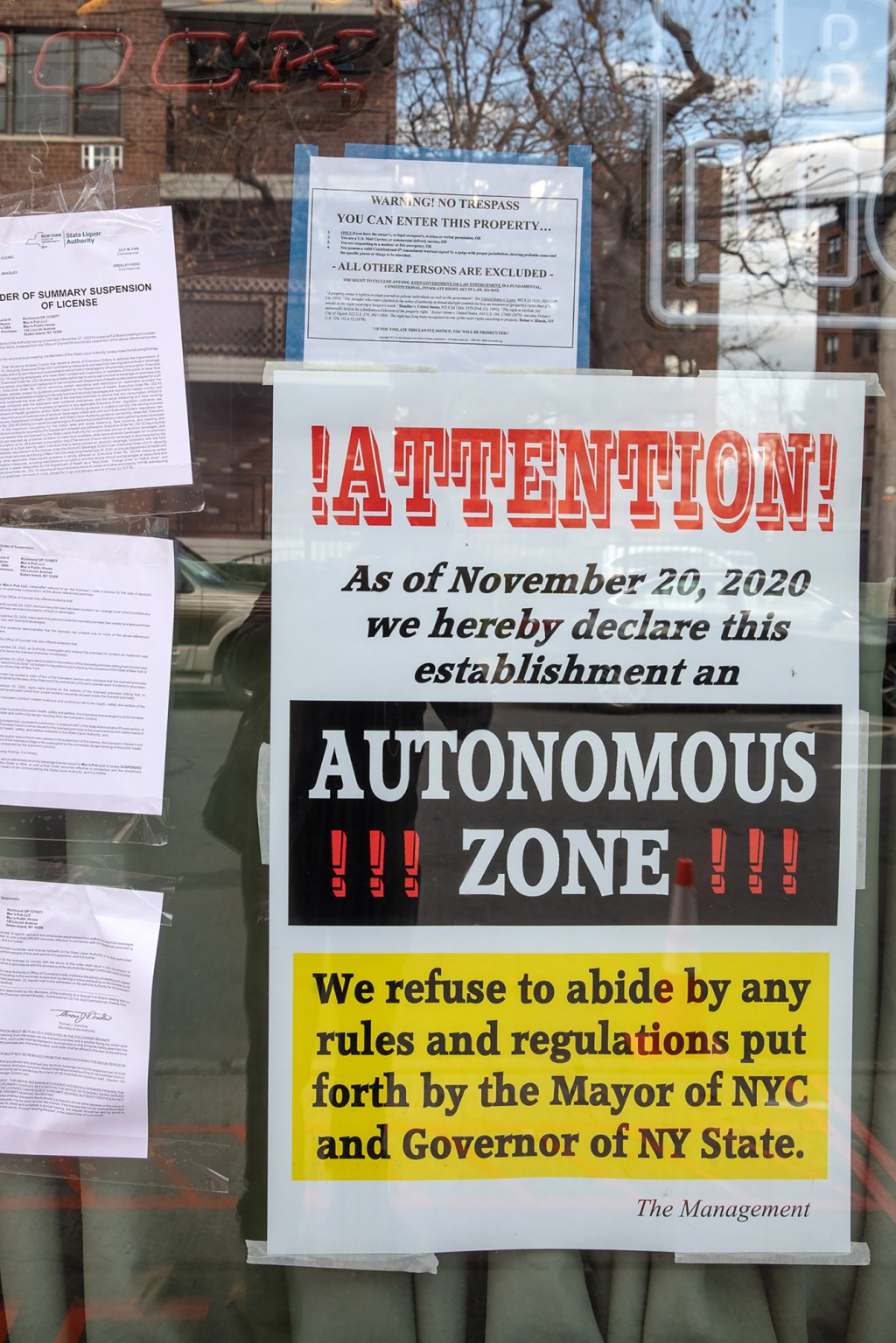 The sign at Mac’s Public House on Staten Island. 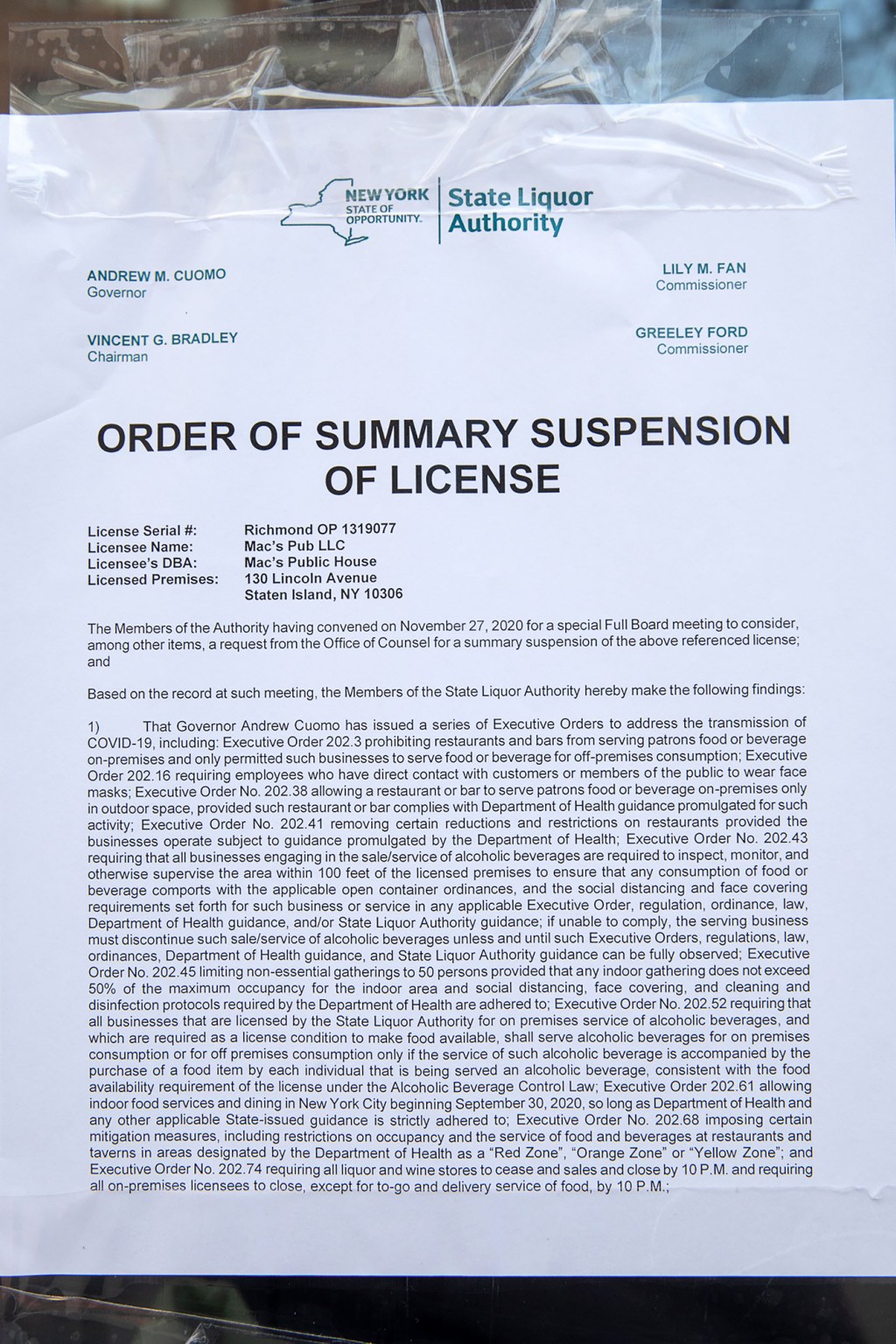 Mac’s Public House at 130 Lincoln Ave. on Staten Island had its liquor license suspended by the state.

“De Bozo,” he continued, presumably referring to Mayor Bill de Blasio, “you want to come down here and pull the license off the wall?” “Feel free to end up comin’ down, and we’ll end up having a conversation before you even think about stepping foot on my property. I will not back down.”

On Saturday, the joint was operating like it was 2019, as a small group of patrons enjoyed cocktails inside the bar, on the house.

“Sure, you can have a drink, we’re not charging,” McAlarney said.

About five customers — most wearing face masks — showed up in about a two-hour span to support the bar, which appeared to be exploiting a loophole for “businesses” in Cuomo’s executive order by not actually charging customers.

“I totally support what he is doing. I don’t support the tyrannical nonsense they have in place,” said Keith Atherholt, 45 who left a $100 tip for a glass of water. “I gave them $100 for this water. They didn’t charge me. I gave it to support them.”

Two other couples hung out about an hour-and-a-half inside.

“He’s alright, he’s doing the right thing,” one person said as he left the bar with a woman and baby. He declined to say if he and his wife paid for the pints of brew and finger food they gobbled inside.

Others stopped by the bar’s Facebook page to cheer the effort.

“Yes!! I keep saying, there’s more of us than them! Every single small business needs to stand together & do this! So much respect to you guys!! Good luck with everything!” Ashley Angelastri wrote.