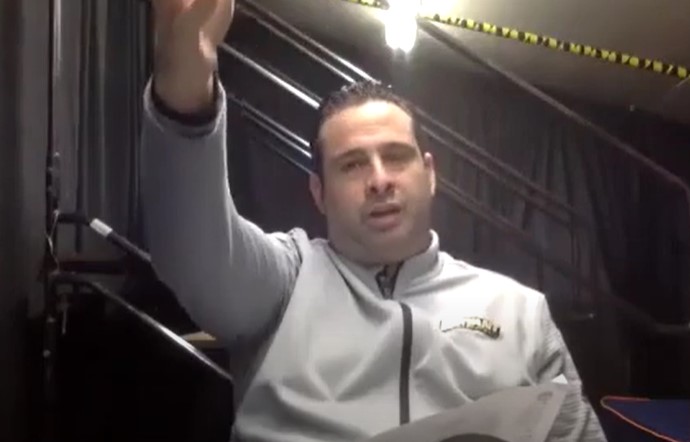 Syracuse barely survived an upset loss to Bryant on Friday night in a game coach Jim Boeheim said should never have been played, which drew a sharp response from his counterpart Jared Grasso.

Syracuse had to stop basketball activities after the 76-year-old Boeheim contracting the novel coronavirus two weeks ago, and the rust showed.

“You cannot play basketball when you don’t practice,” Boeheim said after the Orange held on for an 85-84 victory over the Bulldogs at the Carrier Dome in the season opener for both teams. “That’s a fundamental thing that everybody knows. We were playing really well two weeks ago. Go on 14 days, the players kept themselves in OK shape. We practiced yesterday and some guys were dying. Then we get into a game against a really good team, a smart team, a well coached team, we couldn’t run, we couldn’t shoot…

“But this is my fault. We should never have played this game. We should’ve come back, practiced, played next week. Bryant couldn’t really reschedule it. So, 100 percent my fault.”

Grasso, who is in his third season as Bryant’s head coach, ripped Boeheim’s remarks after his squad’s big upset bid fell just short, saying his school gave them multiple opportunities to call the game off.

“Am I supposed to give an honest reaction?” Grasso told the Providence Journal. “Let me give an honest reaction — we gave them five opportunities to cancel the game. They wanted to play it. We asked to move the date five times. We felt the same way. They were coming off quarantine. They asked to play it. They wanted to play us. We should have beat them at their place. If that’s going to be their excuse, so be it. Now I got angry because we had this conversation with them a dozen times about moving the date.

The 40-year-old Grasso — who was 1-22 in his one season as Fordham’s head coach in the 2009-10 season — said he knows he’s “a nobody” and that he could get some harsh blowback for criticizing a Hall of Fame coach, but reiterated that his version of the story is the truth.

“They decided not to move it,” Grasso said. “But the reality is we tried to change the date and give them the opportunity to change the date. They decided not to. Is that the reason we should have beat them? If they want to use that as an excuse, they can. But we came up here and we should have beat Syracuse at Syracuse. It’s hard for me not to be blunt. I apologize. I would have wanted to cancel the game if I was in their shoes. They didn’t want to cancel the game. They made that decision. We came up here to play and came up here to win and deserved to win. We didn’t make enough plays to.

“They’re a very good team. He’s a Hall of Fame coach. I have nothing but respect for him. But for them to say they wanted to cancel the game is just completely false.”

There is a possibility Grasso, whose team just suffered a bitter loss, took the remarks the wrong way when they were relayed to him. Boeheim took the blame for playing the game, but may have been unartful when he said, “Bryant couldn’t really reschedule it.”

Whatever the case may be Boeheim can thank his son Buddy and Marek Dolezaj for the fact Syracuse didn’t suffer an embarrassing opening loss.

Boeheim made four 3-pointers and finished with 23 points and Dolezaj had 20 points — including two free throws with 22 seconds left — as Syracuse rallied from a 13-point second-half deficit to pull off the win.